This year’s production volumes in Rwanda have returned to a more normal level after last year’s huge harvest. As a whole the production volume appears to be average, though some rule changes in how cherries are delivered has caused some regions to drop in volume more than others. Overall we have less coffee available than last year but the quality of the coffees is generally improved.

In the West the volume of cherry processed by the washing stations we have been working with for some years has been dramatically affected by the new rules. Although we have a little less Gitesi and Mahembe than we would like to this year, these coffees have been cupping with great structure and complexity. We have started this year to work with a new washing station in the West called Gatare. this is one of the oldest washing stations in Rwanda and has capacity for processing large volumes. It is under new ownership, and is showing great potential!

We will also have a number of different Peaberry (PB) lots this year, after the success of the separation of the PB beans in the milling that we have seen in the cup over the last two years we have looked to develop this further. We will now offer some blends of PB production due to them being in small volumes, and some lots of PB from specific washing stations. Keep an eye out for these guys!

We are continuing to work with Furaha, who has three farms (Jarama, Kamajumba, and Nyaruzina) that are on the side of Lake Kivu in the West. These coffees are being processed at Muhundo washing station which was purchased by Furaha recently.

In the South we have focused more on the Shade dried lots being produced, as we have seen the consistency and structure of these coffees really hold together and develop in complexity over time. We have a selection of lots processed at Remera washing station that are from cherries collected in specific surrounding areas. Look for names like Remera, Cyanika, Kabeza, etc.

There have been some delays on shipping our Rwandan coffees this year, this is due to a new system in place for obtaining export clearance from NAEB. They have converted to an online system for export documentation, this system apart from newly being online also requires a number of different people to approve different aspects of the export documents and has so far proved to be a time-consuming process.

The first of these coffees are expected to arrive in the second week of November. 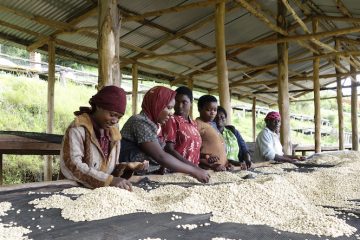