It has been an exacting year in Colombia and for coffee producers across the country. The Colombian people have been grappling with changes in the climate of the country that have dramatic effects on agricultural products, and the coffee harvest has seen these effects.The internal market has seen the highest prices ever recorded by the Federacion Nacional de Cafeteros de Colombia (FNC) price offered to producers. Country-wide unrest followed by protests – which we have detailed in the post down below, restricting movement and creating a bottleneck at the Ports preventing the export of coffee. The global pandemic of Covid-19 brought some of the most severe and lengthy lockdown restrictions any country has seen.

Climate & the impacts on harvest

The harvest throughout all of the regions we operate in was reported as being delayed in May this year. We would usually be seeing harvesting in Narino, parts of Huila, Tolima and Antioquia (Mitaca).

We had already been having discussions with our partners in Antioquia throughout December 2020 and January 2021, and had reports that the weather was unusually cold. This causes the ripening of the cherry on the trees to be much slower, which can increase the quality as there is more time for sugars to develop in the fruit. Given that there is enough sunlight.

During the harvest and following the Mitaca there has been a lot of rain in Antioquia and the cold temperatures have persisted. This has meant that rather than a distinct Mitaca and main harvest here, the two have merged into one another. With the consistent rain and not enough sun the flowering has been spread out and there have been fewer flowers.

In the meantime, in central Colombia, there has also been a lot of rain and not enough sunshine, which has meant that the trees have to divert their energy into displacing the surplus water from the soil around their roots in order not to drown, instead of using their energy to create flowers. We see areas like Huila that the flowering is low and also spread out.

While this is the published price, our partners inform us that the competition for parchment is so high that internal buyers are paying up to COP 2,400,000-2,500,000 per carga, and commercial buyers are accepting parchment that does not meet the quality standards that specialty buyers require. There is an expectation that the harvest still to come will also have a low volume and this is pushing the internal price up.

A simplistic assumption would be to think that this is a positive outcome for producers, as it means they are earning more money. However, the costs of production have increased dramatically. The cost of paying pickers to harvest your coffee has increased, along with the costs of transporting the coffee internally.

Operations at the ports are up and running again, they are working to recover from the time lost during the protest and closures earlier in the year. A number of our partners have already completed some exports successfully. There is a shortage of places on vessels, showing there is still some work to be done to fully recover.

We have been seeing on average better qualities on the table than from the harvest at the end of last year. Currently, we have coffees arriving in September from Antioquia and Tolima, these will be followed by new coffees from Narino and Huila. 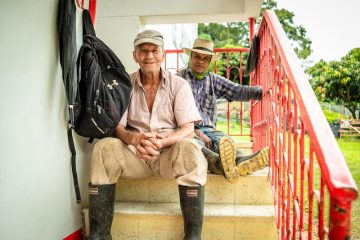 Just over a month ago the Colombian government proposed a major tax reform which sparked massive protests. The government quickly withdrew the reform proposal, but protests continued as people expressed their frustration of years of Read more…