For the second year we are doing a small and limited selection of fully washed Indonesian coffees from Java. These coffees are in our opinion pretty unique and different from most other Indonesian coffees. It’s all from Frinsa Estate located in West Java. We were there in September and have done our final selection and approved the PSS samples. These coffees are now ready to ship and should arrive in end December.   Frinsa is a family business owned by Wildan Mustofa and his wife Atieq. He’s oldest son Fikri is also starting to get involved now as he’s done with his studies. We were in Indonesia last year and I went over there again in September 2017, to get more experience and understanding of what they do and to start cupping with them, get calibrated and source our coffees. But due to some weather issues and lower yield this year the selection was limited. But, the good thing was that the harvest was pretty stretched out so they were still harvesting. And I got a way better overview of the farm and production, and we decided on some coffees they could process for us during October. I also worked in their lab on roast profiling and cupping protocols for quality control, specially with Fikri that’s picking up a lot of interest for that part as well as farming and processing.

The concept is interesting as they have many different cultivars all separated at the farms. The Sigarar Utang is the cultivar they have most of and it’s performing really well. I also discovered a very interesting cultivar called Ateng Super. It’s from the research institute and recently planted. It’s big and bold like a Pacamara, and very distinct in flavor. It was cupping great and all the tables and was very recognizable.

They are working systematically on the quality control and protocols for improved preparation. They have sustainability programs and have donated land to a local school. They use white cotton bags for export produced in the area so the local workers have additional income outside of the harvest period. They also have environmental awareness and work actively to preserve the local forest and ecosystem.   Wildan and Atieq started their first coffee project in Sindangkerta, Weninggalih area in 2010. This later became the main growing area at his farm Java Frinsa Estate. Since the first year of production, Wildan has aimed to focus on quality which requires meticulous attention and processes. While the majority of Indonesian producers are doing wet hulled coffees, even for specialty, Wildan is focusing on fully washed. Besides the quality, and social and economic impact for the community, we believe the coffee project also have long term benefits for water conservation and reforestation .   Frinsa Estate is located in West Java, locally called Sunda. They grow coffees in altitudes from 1300 – 1600 meters above sea level. They have a wet mill and a well ventilated storage space and a dry mill. All located at 1400 masl altitude. This means they are in full control of their product from harvest to grading, sorting and shipment. Frinsa Estate have 6 main growing plots spread out in the area. And they buy cherries from a few selected outgrowers in the surroundings of the Estate. They sell these coffees under the brand name Frinsa Collective.

They are harvesting from May – September, with the main harvest from June- August. The coffees are picked and then hand sorted for unripe and diseased cherries.

After harvesting the coffees are dry fermented in small tanks 15-18 hours before they are rinsed and soaked under water for another 10-12 hours and washed under clean water.

They mainly dry on patio, but are investing in way more drying tables for the future. Currently most of the coffees are pre dried on beds for a day or two in greenhouses and then transferred to the patio. Drying can take 14-20 days, depending on the rain during the drying period. 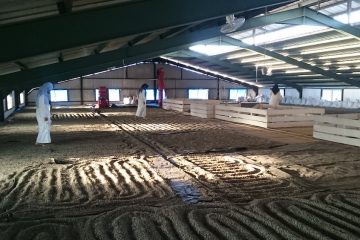 Indonesia was hit pretty hard by the pandemic in 2020 and sadly, after re-opening, they are now back in lockdown. Of course this has caused a lot of problems with harvesting and processing. Luckily, we Read more…